Did you know that the world’s smallest working Light Tower sits on the Town Pier, North Queensferry, alongside one of the engineering wonders of the world, the Forth Bridge?

Built in 1817 by Robert Stevenson as a key part of the Queensferry Passage across the Forth, this tiny part of Scottish maritime history has now been carefully restored to full working order. It reopened to the public in June 2010, when HRH The Princess Royal relit the lamp 120 years after it fell into disuse. 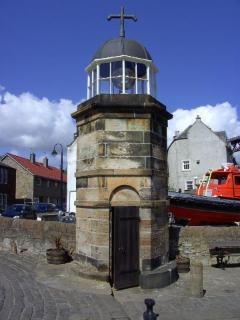 Visit us to discover how the light-keeper kept the lamp burning and how the unique signalling system worked. Then become part of the tower’s history by lighting the lamp and receiving a Certificate of Competence as an Honorary Keeper of the Light.

This tiny gem of a lighthouse is one of Scotland’s unknown treasures.

Once you’ve wondered at the Light Tower, there’s a whole North Queensferry Peninsula to explore.
You can stroll round the village, investigating its history, then seek out wildlife in the Carlingnose Nature Reserve, or wander further afield to take in the scenery along the Fife Coastal Path. Why not make a day of it in this hidden jewel in the Kingdom of Fife? 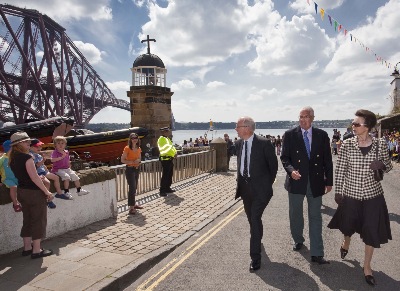 HRH The Princess Royal is accompanied by NQHT Chairman James Lawson on a walk through North Queensferry having lit the flame when she officially opened the Harbour Light Tower on 22 June 2010.